All content on this site is owned by Juanita Stevens and LightHouse PowerHouse Ministries. Not available for republishing without permission.

“Shut up and Listen. You are talking too much and not listening to what I have to say!” These were the Words I was needing to hear, as I was not paying attention to the gentle words God had been speaking. “Be still and know that I am God.”

For the last two months I have been on a Sabbatical and have been praying, reading my Bible, praying, reading books, praying, going to different churches, and praying some more.  I was getting so frustrated because it was as if my prayers were going nowhere. There were no answers. God was silent. In reality, God wasn’t silent I just couldn’t hear Him because of the noise around and in me.

I realized that I needed to be silent. I needed to allow God to touch my heart. I discovered that it was okay to pray for myself and the things that I needed in my own life. It was also okay to just sit still and be quiet while I listened to what God had to say.

Once I was quiet and asked God for His direction in books to read, messages to listen to, friends to talk with, He started to open up my heart and ears to hear Him more clearly. As I sat quietly reading, listening, and just being still, God revealed to me that I was talking too much, my prayers had become complaint sessions and not grateful sessions. There was too much noise around me – media, appliances, complaints, others, etc. I needed quiet and to be quiet before the Lord.

To help me learn this lesson God took me to I Kings 19:1-18 and the life of Elijah. Let’s catch up to Elijah and see what has been going on. In I Kings 18 Elijah has just defeated the priests of Baal at Mount Carmel. He has prayed for rain and the rain comes.(Served the Lord diligently, doing many good things.) I Kings 19 starts off with King Ahab telling Jezebel all that Elijah had done and she is angry and wants him dead.(Is on the most wanted list of enemies of the Queen.)

So, Elijah is now running for his life. He leaves his servant in Beerasheba and goes a day’s journey into the desert. There he sits down and prays that he might die. “I have had enough, Lord. Take my life; I am no better than my ancestors.” (We see burnout with some depression setting in.)

you.” After eating, Elijah travels forty days and forty nights to Horeb the mountain of God. There he goes into a cave and sleeps until morning.

The next day he and God have a conversation. Elijah is telling God how zealous he has been for Him and all that had happened and that he is the only one left. Now he is running for his life because they want to kill him. God tells him, “Go out and stand on the mountain in the presence of the Lord, for the Lord is about to pass by.”

n the fire. Then a gentle whisper came, and Elijah went out with his face covered and listened to God and what He had to say.

Once again God asks Elijah, “What are you doing here?” Elijah’s answer is again to tell God how zealous he has been for Him and now his life is in danger as they want to kill him. God then tells him the plans and instructions of what he is to do next.

God listened to his complaining and then told him what was next.

Elijah was burned out and feeling unappreciated for all he had done for the Lord and feeling all alone. He did not know or understand that God had set aside others for His purposes to come. After listening to Elijah, God told him about the others and the future plans for him and them.

God knew what was going on in Elijah’s life and took the time to minister to him in ways that would help bring Elijah back to the correct focus – serving Him. He allowed him the time to rest and be nourished, took him to a place of solitude, revealed Himself to him and then spoke in a quiet gentle whisper letting him know that all is going to be alright because He is in control and has a plan.

God did just that for me as well. He took me out of the busyness of life and ministry, allowed me time to rest and be nourished both physically and spiritually. He gave me the solitude needed to refocus and has revealed that He has a plan for me and I need to trust Him with the next steps.

This was a hard process and lesson to learn as I just go and go and go. Doing things that are needed. Serving wherever a need arises. One thing I have learned is that it may be needed but I may not be the one that is needing to do it. I am still in the learning process of learning how to say “no” in order to say “yes” to the thing that God really wants me to do.

I am learning how to be quiet and listen to what God has to say to me. I am hearing His gentle whisper directing me in new things. He has started to release some great ideas and brainstorming has begun. I can’t wait to see where God and I are going next. I have learned that I need to “Shut Up and Listen.” 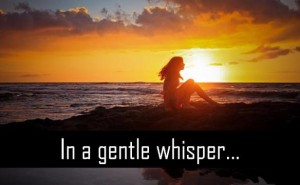 Lord, I am excited to see where You and I will go next in this great adventure called life. I am still learning and am thankful that You are a patient God who is helping me to learn how to “Be still and know that You are God.” May I remove the noise that distracts me from Your Gentle Loving Whisper and be still before You. Amen.